From Bogleheads
< User:LadyGeek
Jump to navigation Jump to search

Generally speaking, diversification is about not putting all of one's eggs into a single basket. The U.S. Securities and Exchange Commission writes:

Diversification can be neatly summed up as, “Don’t put all your eggs in one basket.” The idea is that if one investment loses money, the other investments will make up for those losses. Diversification can’t guarantee that your investments won’t suffer if the market drops. But it can improve the chances that you won’t lose money, or that if you do, it won’t be as much as if you weren’t diversified.[1]

The first meaning appears in the text of authors who often combine the word "broad" (or a similar one) with the word "diversification" to mean "spreading one's money broadly across a market" (using capitalization-weighting for obvious arithmetic reasons[2]) and across stocks, bonds, and (sometimes) cash. For example, when discussing the creation of the Vanguard S&P 500 index fund and of the Vanguard Total Stock Market index fund, Jack Bogle wrote:

In 1975, I created the first index mutual fund, now known as Vanguard 500 Index Fund. Then, as now, I considered it the very paradigm of long-term investing, a fully diversified portfolio of U.S. stocks operated at high tax efficiency and rock-bottom costs, and designed to be held, well, “forever.” It is now the world’s largest equity mutual fund.[3]

The second meaning stems from economic theory, where economists, like Markowitz, define "diversification" as a technique to combine securities to reduce "risk" (defined as "volatility") without sacrificing "expected return".

The above two distinct definitions of "diversification" can be conflictual in the context of portfolio construction (much like the two definitions of "risk" mentioned above).

By regulation, every mutual fund is classified as "diversified" or "non-diversified." Most are officially diversified, and those that are not must say so. A summary of the requirements, known as the 75-5-10 rule, is:

This corresponds well with one traditional understanding of diversification. Before buying any mutual fund, a buyer should take time to look at the official fund documents for a statement such as "the fund is considered non-diversified." Such a statement isn't necessarily reason for alarm, but it is a red flag that says the fund is unusual, and that you should look farther and make sure you know why it is "non-diversified" and whether it is a concern to you.

The definition results in some surprising categorizations. For example, the Vanguard REIT Index Fund, VGSIX, is considered diversified even though it is invested exclusively in a single narrow industry sector, constituting less than only 4% of the stock market: commercial real estate.

On the other hand, the Vanguard Growth Index Fund, VIGAX, holds stocks in ten different sectors. Yet, in April 2019, Vanguard noted that

AQR says that its Style Premia Alternative Fund[5] invests "in a broad spectrum of asset classes and markets" and "[seeks] to limit exposure to poor performance within any single style or asset class," while containing a fine-print disclosure that "This Fund is a non-diversified fund."

These seeming surprises simply underline the fact that there is more than one understanding of the term "diversification."

John C. Bogle and others have pointed out that as the assets in a mutual fund grow, the 10% requirement makes it harder and harder for a "diversified" fund to own smaller-cap stocks. For example, a diversified mutual fund with $100 billion in assets, that is actively managed, cannot have any meaningful investment in a microcap stock with $100 million in market cap, because it cannot invest more than $10 million = 0.1% of its portfolio in that stock without breaking the 10% rule. Therefore, as a diversified mutual funds grows, it is constrained to put a smaller and smaller percentage of its portfolio into poorly-known small-company stocks that might offer an opportunity for stockpicking skill, and more and more into the larger-cap stocks that everybody knows about. It becomes harder and harder for growing funds to depart much from the market. This is sometimes called "the curse of success."

Sectors are eleven broad categories of similar businesses. In 1999, MSCI and S&P developed the Global Industry Classification Standard (GICS), which is accepted as the standard definition. Companies that are in the same sector are subject to similar economic forces. The behavior of e.g. Cisco Systems stock depends to a large degree on how high-tech in general is doing, and only partly on what things Cisco itself is doing differently from other high-tech companies.

To illustrate this, consider three stocks in the information technology sector--Amazon, Apple, and Cisco System--and three in the financial sector--Citigroup, AIG, and Bank of America.

During 2000-2003, all of three of the information technology stocks imploded, Apple losing 70% of its value, Amazon losing more than 90%. Meanwhile, the three financials were largely unaffected.

The turn of financials came in 2008-2009, and this time it was the financials that imploded--a $10,000 investment in Citigroup losing more than 90% of its value, while AIG lost 99.5%, $10,000 becoming $20! Information technology was relativy unaffected. The value of Cisco was "only" cut in half, and Apple and Amazon made money.

The stock market itself, total stock market indexes and index funds, and the S&P 500 which is an approximation to the total market, include stocks in every sector, but not with equal dollar weighting. 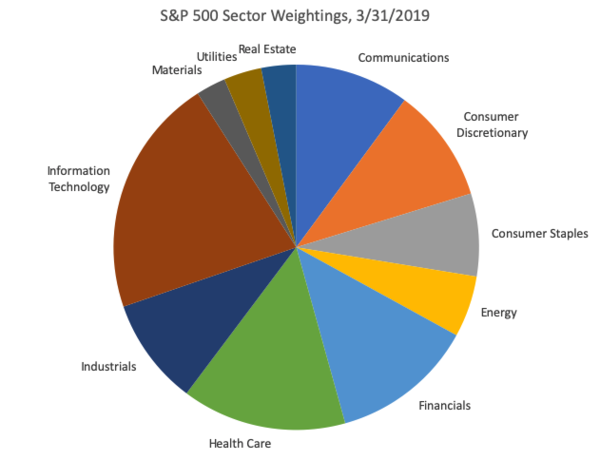 In the context of picking a portfolio of a small number of individual stocks--which is not what Bogleheads generally do with most of their portfolio--diversification can be simply a risk control measure; and intentionally choosing stocks from a variety of sectors is one way to achieve it.

In the context of portfolio construction, perhaps using ETFs and mutual funds, sectors can be viewed as a kind of asset class, and since they have imperfect correlation they can be viewed as uncorrelated asset classes that might produced a quantitative diversification benefit in the Markowitz sense. Thus, it is sometimes suggested that equal sector weighting--putting an equal number of dollars into each of the eleven sectors--might be superior to investing in an S&P 500 or total market index, allowing each sector to have its natural capitalization weight.

Within the framework of modern portfolio theory (MPT), the term Markowitz diversification can mean:

Combining securities with less-than-perfect positive correlation in order to reduce risk in the portfolio without sacrificing any of the portfolio’s expected return.[6]

This approach to diversification was introduced by Harry M. Markowitz in his ground-breaking 1952 paper, Portfolio Selection.[7]

The basic idea of the math behind Markowitz diversification looks like this:

The vertical axis represents return; investors want it to be as high as possible. The horizontal axis represents risk; investors want to be as far to the left as possible. The green and red dots represent bonds and stocks, respectively. The values shown are very close to the actual historical value for US intermediate-term government bonds and US large-company stocks from 1926 to the present, but rounded for ease in doing mental arithmetic.

The straight line shows what the results would be if stocks and bonds had moved perfectly together, a correlation of ρ = 1.0.

One might expect that the risk of the portfolio, measured by 𝛔, sigma, the standard deviation, would also be exactly halfway in between stocks and bonds, but it turns out that this is not true. If stocks and bonds were perfectly correlated--correlation coefficient ρ = 1.0--then it would be true, as indicated by the straight line and the midpoint. When the correlation is 1.0, the risk of the 50/50 portfolio exactly splits the difference between that of stocks, 𝛔 = 20, and bonds, 𝛔 = 6. For the 50/50 portfolio, 𝛔 = 13.

However, with a correlation coefficient of zero, the return of the portfolio is not changed, but the risk of the portfolio is somewhat reduced. This is shown by the fact that the ρ = 0 line is curved, and that it is always on the left of the ρ = 1.0 curve.

When the correlation is imperfect, the returns from one asset may sometimes partially fill in gaps in the returns from another. The result is that the fluctuations in the portfolio as a whole are somewhat smoothed out. In this case, the smoothing is manifested as a reduction in 𝛔 from 13 to 10.44.

This, then, is the diversification effect in portfolios, from the point of view of modern portfolio theory. Portfolios of uncorrelated assets have an efficient frontier that bows toward the left. The return is just the weighted average of the returns of the holdings, but if they are uncorrelated, the standard deviation is less than the weighted average of the standard deviations of the holdings.

Two points should be noted. First, this doesn't imply that diversified portfolios are crashproof. The effect is there, but for realistic asset characteristics it is fine tuning. It is an edge, not armor plate. In official fund documents, if "diversification" is mentioned as a benefit,it includes a boilerplate disclaimer, "Diversification does not ensure a profit or protect against a loss in a declining market."

Second, the illustrated effect is just math. It applies in the real world if the assumptions behind the model apply. It doesn't if they don't. If we knew for sure that over the next ten years stocks and bonds would duplicate their historic values--returns of 12% and 5% respectively, standard deviations of 20% and 6% respectively, and correlation of 0.0--then of course we would know that a 50/50 portfolio would have a return of 8.5% and a standard deviation of 10.44%. But past returns are not a sure predictor of future returns, and the same is true of standard deviations or correlations. In fact, correlations seem to be even less stable than return itself.

John C. Bogle has written "Diversify, diversify, diversify!"[8]. His views that investors should prefer to invest using broadly diversified stock and bond mutual funds is a core element of the Bogleheads® investment philosophy.