From Bogleheads
< User:Hoppy08520
Jump to navigation Jump to search

The flowchart below depicts how to prioritize investments between multiple accounts, using the same priority order as listed above.

Assuming you have a specific amount to invest, start from the top left and work you way downwards until you have invested all your money.

The blue diamond boxes are decision boxes where you fork in one direction or another based on your eligibility for various accounts, and in box (8), whether you generally favor Roth or Traditional. The green boxes depict contributions to a particular account. The yellow diamond boxes ask if you still have more to contribute after having made contributions just previously in one of the green boxes. For the yellow diamonds, only the "yes" fork is shown; the "no" fork means you have contributed as much as you are able to, so you stop at that point. This flow chart works for both single and married investors. For couples, in many cases one spouse may be eligible to make contributions in a particular box, and another may not. Therefore you may traverse through several "contribution" boxes as you walk through the complete flowchart. Also, this chart will not tell you if you should favor Roth or Traditional investments. You must determine that independently. 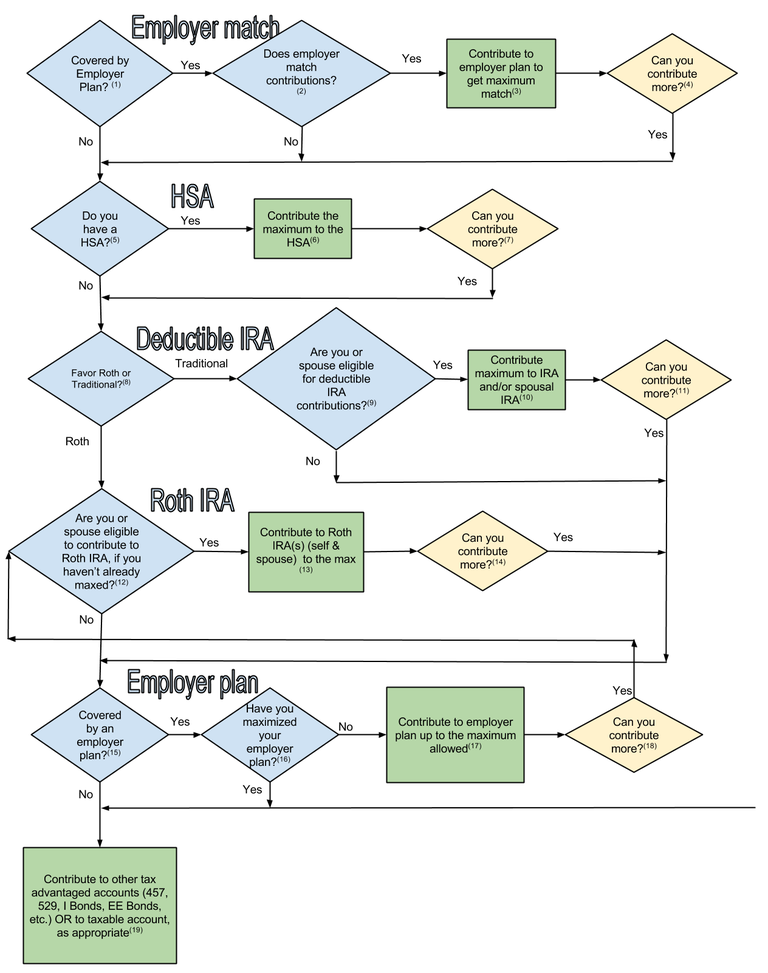 Special notes on some of the boxes.

Box (3): Contribute to maximum match. Choose either the traditional or Roth (if available) version of your employer plan, depending on your preference.

Box (9): Eligible for deductible IRA contributions. This box can be complicated. For married couples, one couple may be eligible to make deductible contributions, and the other might not be, or both may be eligible, or neither eligible. Therefore, for Box(10), contribute as much deductible Traditional IRA as either or both spouse can, and then move on.

Boxes (15) and (16): Employer Plan. You may arrive at this more than once depending on the route you take. In Box (17), choose either the employer plan's traditional option or the Roth option (if available) depending on your preference.

Box (19): Other accounts. This box comes in after you've maximized your contributions to employer plans, HSAs, and IRAs. How to prioritize investments at this point is beyond the scope of this flow chart as there are so many variables to consider.

Depending on the particular investor, various exceptions to the flowchart may arise. For example: