An extended market index, or completion index, fund is combined with an S&P 500 fund such that the total "completes" the composition of the US total stock market.

A completion index is formally defined as a sub-index of a Total U.S. Market Index which excludes the constituent stocks of the S&P 500 stock index.[1] [2] [3]

Vanguard offers an Vanguard Extended Market Index Fund (VEXMX for investor shares, VEXAX for Admiral shares, VXF for the ETF). Other companies offer similar "extended market index" or "completion index" funds. These funds hold all, or most, of the stocks not included in the S&P 500 index. [note 1] 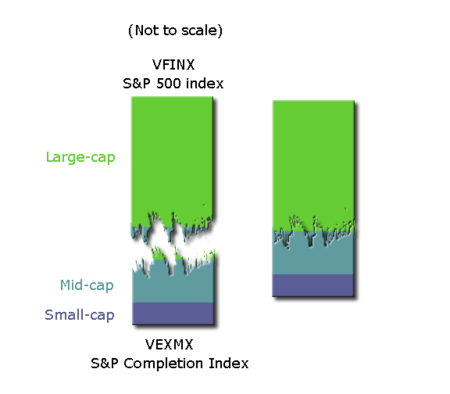 How to use an extended market fund

The fund is considered a complement to Vanguard 500 Index Fund. Together they provide exposure to the entire U.S. equity market.

Primarily, then, these funds should be used by investors who want to invest in the total market, and would like to use a total stock market fund, but who, for whatever reason, find it necessary to hold a separate S&P 500 index fund. There is no well-known investment theory that ascribes any particular virtue to "the total market except for the S&P 500" as an entity in itself. Investors who want to depart from total market weighting and choose their own proportion of large-cap stocks, probably want to adjust mid-cap and small-cap exposure independently too.

Investors desiring to duplicate the total market portfolio using an extended market fund should manage their portfolio so as to include the S&P 500 fund and an Extended Market Index fund in about an 80%/20% proportion, and they will then be essentially holding the market.

The 80%/20% ratio may require rebalancing from time to time, and the ratio may change with the composition of the total market. This does not need to be done frequently or with scrupulous accuracy. One convenient source for the proper current percentage composition is Vanguard's benchmark comparison.

Overlap and other niceties

The S&P 500 is S&P's choice of "leading companies in leading industries." In 1957 when the index was developed, it was intended to represent, one could say, the whole market as seen by "normal" investors. Conventional wisdom at the time was that, in the language used by Benjamin Graham, "defensive investors" should limit themselves to "primary companies" in an industry. It wasn't until the eighties that the conventional wisdom began to advocate small-caps, and not until the nineties that people began to think of value and growth as numerically defined categories whose weight should be consciously chosen. The S&P 500's mid-cap holdings include an underweight to mid-cap growth that easily escapes notice because it's a small imbalance within the mid-caps which comprise only 13% of the S&P 500. 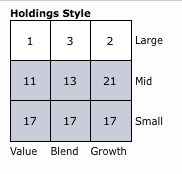 The corresponding chart for the Vanguard 500 Index fund, which tracks the S&P 500, shows the deficit in mid-cap growth, 5/5/3. 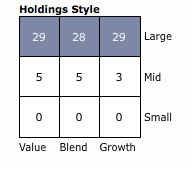 Is an extended market index fund an appropriate tool for implementing a "small-cap tilt?"

The natural way to implement a "slice-and-dice" portfolio (dividing total stock market allocations into segments) is to use mutual funds that focus on and isolate the style factors; that is, funds that concentrate on one of the nine Morningstar style boxes. With regard to size alone, it seems illogical to use a fund that covers mid-cap and small-cap stocks.

While index funds targeted to particular style boxes might be better in theory, employer provided retirement plans frequently limit choices to actively managed funds with high expense ratios. An investor who desires to depart from market cap weighting with regard to size alone, and is limited by plan choices, may find that a low cost extended market index fund is the lowest cost way to implement the strategy.

Oftentimes, when the actual behavior of real-world small-cap and mid-cap funds are examined, surprises emerge. For example: Over a 10 year period (2002-2012), the growth charts for the Vanguard Small-Cap Index Fund (NAESX), Mid-Cap Index Fund (VIMVX), and Extended Market Fund are almost superimposed--it hardly seems to matter which is used. [note 3]

A number of forum members feel that, regardless of theory, and regardless of the rationale behind the construction of a completion index; as a practical matter an extended market index fund can be a perfectly good way to provide a degree of small-cap tilt. [5]