As Erb, Harvey, and Visconti [4] noted in 1997, emerging market bond returns from 1991-1997 outperformed the performance of the S&P 500 index. They also noted that this short initial return sequence showed high volatility and negative skewness, suggesting that downside risk was high, although not realized in the short term returns data. This insight was proved correct, as the "Asian Contagion" financial crisis in 1998 produced negative returns in 1998. Returns from 2000-2010 have been somewhat less volatile (as measured by standard deviation, see table below), but the asset class has retained its quality of negative skewness. Erb, Harvey, and Visconti state:

One difficulty with measuring skewness is that it likely changes through time. Therefore looking at past data may give no indication of future expected skewness. This is the so called “peso problem” in economic theory. Looking at past currency movements, you may see little variation in rates during a managed float regime. However, there is a probability of a devaluation that you cannot detect from looking at past data. This is just the definition of negative skewness.


(View Google Spreadsheet in browser, then File --> Download as to download the file.)
Note: If the spreadsheet is blank, select a different sheet, then back to that sheet. The image will be refreshed. 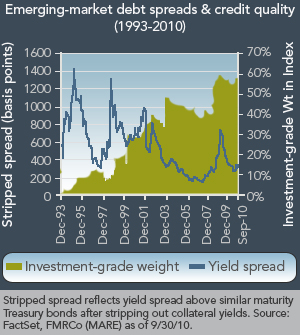 In accordance with the high historical risks associated with emerging market bonds, investors have historically demanded high yields as compensation for bearing risk. Yields, of course, fluctuate with economic fundamentals, as well as with investor sentiment. Emerging market bond interest rates are often measured against risk free debt instruments, resulting in what is known as a "yield spread". The adjacent figure shows yield spreads for the period 1993-2010 between the US dollar denominated JP Morgan EMBI Index and comparable US treasury bonds. The figure also traces the level of credit quality within the EMBI index.

Defaults and restructurings tend to occur in clusters. Historical clusters include: [8]

The following table, based on the Reinhart, Rogoff, and Sevastano paper, Debt intolerance, provides historical default and restructuring data (1824-2001). The table also shows the amount of time countries have spent under default or restructuring, which has often been considerable. Reinhart, Rogoff, and Sevastano also note that defaulting nations have also frequently been high inflation nations, having experienced inflation at or above 40% per month.

The following table, drawn from the Vanguard Institutional paper, What's Next for the Eurozone and based on data supplied by Moody's, lists emerging market defaults and principal losses over the 1998 - 2006 period.

Larry Swedroe et al., in their book, The Only Guide You'll Ever Need for the Right Financial Plan: Managing Your Wealth, Risk, and Investments [11] argue against including emerging market bonds in investment portfolios. The authors cite the higher default risk and extreme volatility associated with emerging market bonds as negative features of this asset. They make the following clarifying arguments about the negative features:

In a Bogleheads forum post, Rick Ferri states that having an allocation to international bonds might provide a diversification benefit, but it may not be worth the extra cost and complexity.[16] He recommends the following fixed income allocation:

There are a large assortment of actively managed emerging market bond funds. [24] Most of these funds are load funds. No-load funds are available at lower costs with the lowest cost funds registering expense ratios running between 0.88% and 0.99% per annum.

Active funds add to the risks inherent in emerging market bonds by introducing manager risk, the chance that poor security selection or focus on securities in a particular sector or category will cause the fund to underperform relevant benchmarks or other funds with a similar investment objective.