According to a mutual fund tracking the FTSE Global All-Cap Index, a market-capitalization-weighted index designed to measure the market performance of large-, mid-, and small-capitalization stocks of companies located around the world, as of mid-2013 about 51% of the world's stock investment opportunities, as measured by market capitalization, are outside of the United States. See Figure 1. 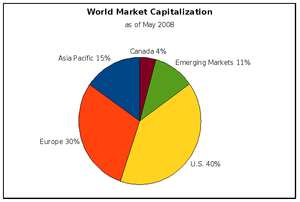 So it makes sense to consider diversifying your portfolio by taking advantage of the large asset class of international stocks. Today, focusing solely on the U.S. means you could be missing many attractive investment opportunities.

Consider that in international markets you will find...

Despite the potential drawbacks of a perceived higher risk, the impact of currency fluctuations, higher investment costs, and an aversion to short-term underperformance relative to domestic markets, international stock investments provide a diversification benefit relative to an all-U.S. equity allocation. 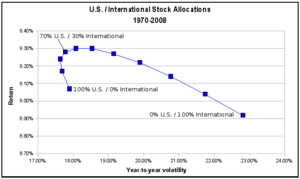 The graph in Figure 2 shows relative investment return and volatility (standard deviation of return) for a U.S. S&P 500 index investment as well as an international EAFE (Europe, Australia, Far East) index investment. The graph shows the years from 1970 -- the first full year of the EAFE index -- to the end of 2008; a 39-year investment period. During the full period, the S&P 500 index had both a higher return and a lower standard deviation than the EAFE index. However, notice the non-linear curve of the graph. This graph shows what is known as an efficient frontier and shows that adding the diversifying effect of the EAFE portfolio (in 10% increments as denoted by the squares) to an all-U.S. S&P 500 portfolio actually increased return while also decreasing standard deviation. The 'most efficient' point being around a 70%S&P500/30% EAFE combination. But notice that adding anywhere from 1-40% EAFE resulted in an increased return with either a similar or lower standard deviation. However, it must be noted that this data is limited in time period and entirely backward-looking - it is unknown what the proper mix may be in the future based only on the past. 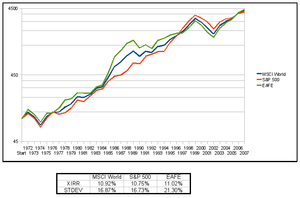 Of course, these returns are based on historical numbers for a nearly 40-year period. Looking at Figure 3, which shows the efficient frontier by decade, it is obvious that the optimal U.S./International allocation differs depending on the period. However, one thing is clear; combining both U.S. and International stocks has historically increased your return, decreased your volatility of returns, or both. 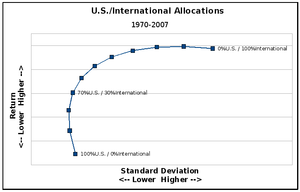 Figure 4 is similar to Figure 2. However, instead of using just the EAFE developed market international index, it combines that with international emerging market figures when they became available from 1988 onward. Figure 4 shows the even greater diversification effect of both developed and emerging markets stocks when added to an all-U.S. stock portfolio.

Another way to visualize the diversification benefits of holding both U.S. and international equities is shown in Figure 5. This graph shows the growth of an initial $100,000 investment over the period of 1972 to 2007. The S&P 500 index is representative of United States stocks, while the EAFE (Europe, Australia, and Far East) index is representative of developed international markets. The MSCI World index is comprised of all developed market countries. Their percentage in the index is weighted by their global market-capitalization, and so fluctuates in size as each country increases or decreases its world market presence.

Unlike the previous graphs mentioned, which held a static U.S. to international weighting, the MSCI World index shown in Figure 5 has fluctuated quite a bit with the U.S. comprising the majority of the index during the early periods, Japan dominating during the 1980's, and Europe gaining an increasing share more recently as the U.S. percentage has declined to about 45%. So while this graph may not be directly comparable to one showing a static U.S. to international allocation, what it does show is that, historically, holding a global-market weighted index has included a diversification benefit in that the investment return was higher than an all U.S. allocation, while its volatility (or standard deviation) was significantly tempered from that of an all international allocation.

The increased number of globally oriented equity funds such as Vanguard's Total World Stock Index Fund may reflect a shift in thinking regarding domestic/international equity allocations. Both because markets tend to move in different cycles and because you want to diversify your currency exposure, the need for both U.S. and international allocations is a common recommendation. With U.S.-based companies now deriving a significant portion of their revenue from overseas, and conversely, international companies making large portions of their sales in the U.S., the idea that you need to treat U.S. and international stocks as distinct assets has been somewhat blurred.

Some international funds select stocks from many countries, while others focus on a particular region or country. Still others select investments from countries with similar economic conditions, including the two major distinctive types of either developed markets or emerging markets.

Not surprisingly, the risks are generally higher in the emerging markets, where governments and financial markets may be less certain. On the other hand, emerging markets may offer the potential for faster economic growth as well as market cycles that are less synchronized with the developed markets.

Country risk. Events in a specific country—such as political upheaval, financial troubles, or a natural disaster—can drive down the stock prices of companies in that country. You can reduce but not eliminate this risk by choosing an international fund that invests in many countries and has a strong focus on developed nations.

Liquidity risk. Sometimes foreign stocks can be difficult to buy or sell, in part because trading volume on foreign stock exchanges tends to be much lower than on U.S. exchanges. Liquidity risk means the fund manager may have trouble buying or selling stocks without causing their prices to rise or fall substantially. You can reduce this risk by focusing on funds that invest in many countries and on those with well-established financial markets.

Currency risk. Currency risk can cut both ways. While we earn and spend most of our money in home-country currency, we also have many assets in that currency not accounted for within investing portfolios - future earnings (human capital), homes and other goods - thus, the need to minimize foreign-currency exposure may not be as great as it first appears from a portfolio-only perspective.

Consider two common cases: a young investor who is mostly in stocks is also heavy on human capital in general, while an older investor who has moved toward more (home-country) bonds has less human capital but also less equity exposure in general. In either instance, currency risk is mitigated by elements seen and unseen. Thus, many if not most glide paths provide less currency risk upon closer inspection, once an individual's entire financial situation is accounted for.

There is no expected return to currency diversification in itself. However, some degree of zero-expected-return diversification (e.g. currencies, commodities) can be beneficial to a portfolio's total risk/return profile. Finally, some people plan to spend money abroad at points in their life, making other-currency holdings potentially advantageous.

Country risk Again, this is a risk that cuts both ways. As illustrated in the previous section, country-specific risk is a concern for portfolios. This is not, however, limited to foreign countries. No matter how strong and developed a single market may seem, there are cases (like Japan) in which the market has underperformed for decades. So far in the 2000s, the United States has underperformed the global market, for instance, as well.

Liquidity risk In an effectively efficient market, one should presume that liquidity risk is a factor in returns - or to put it another way: the market has priced in such risks and provides expected rewards in return for them. The best way to control equity risk is, in general, not to avoid a subset of equities, but to hold more assets in bonds or cash-like instruments for diversification.

Determining an appropriate domestic/international allocation is a subject of much debate. See: Combining domestic and international stocks.