A Bankers acceptance (BA) is a short-term debt security created "when a time draft drawn on a bank, usually to finance the shipment or temporary storage of goods, is stamped “accepted” by the bank. By accepting the draft, the bank makes an unconditional promise to pay the holder of the draft a stated amount at a specified date. [1] Bankers acceptances are discount securities, usually having a three month or six month maturity, with the difference between the discount and maturity face value constituting interest. They are thus considered money market instruments along with treasury bills and commercial paper. The most common way an individual investor holds BA's is through investment in a general money market fund.

In the nineteenth century, bankers acceptances where primarily offered in England. [2] In the U.S. bankers acceptances were introduced by the 1913 Federal Reserve Act, with primary motives including increased liquidity for the instrument as well as fostering U.S. international trade and commerce. The act made BA's eligible for Federal Reserve open market monetary operations until this provision was rescinded in 1984. [1] 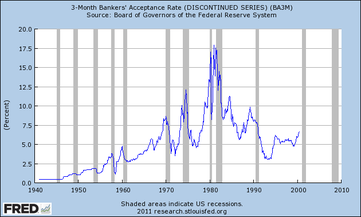 Current interest rates on bankers acceptances are published by the Wall Street Journal.[4]

Historical interest rates are provided by the St. Louis Fed for the years 1940-2000 (see Figure 1). This series was discontinued in 2000. The chart shows the rise in banker acceptance interest rates during the inflationary decade between 1970 and 1981, as well as the fall in rates during the disinflation years between 1981 and 2000. In the recent "Great Recession" years (2008-2012), interest rates have been well below 1 percent, although somewhat higher than rates on treasury bills.

Bankers acceptances are considered to be lower risk money market securities. The lower risk is due to the three factors backing the security: the goods being sold; the firm drawing the credit; and the bank that guarantees, i.e. accepts, the loan. [2] During the Great Depression, the yield spreads between bankers acceptances and treasury bills remained fairly consistent. [5]