Basis is the total amount of nondeductible contributions in your Traditional IRAs.[2] It is a fixed dollar amount and does not grow as the account value grows. It stays steady until a Roth conversion or withdrawal from the account removes some/all of it possibly along with other dollars. This is the same word, but defined slightly differently than the basis used when calculating capital gains. 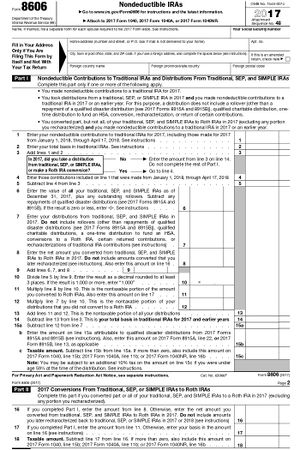 Example 2. Ben has $50,000 in his Traditional IRA and has some taxable money he can use to pay the conversion taxes, but not enough to convert the entire account. He also has a Rollover IRA with $350,000 that contains only a 401K rolled over from a former employer. He is not eligible to contribute to a Roth directly but wants to do a backdoor Roth. It will be his first time for a backdoor Roth and he thinks he also will like to do one in the following year as he will only convert half the Traditional IRA this year.

Before Ben can start the backdoor Roth, he rolls over the Rollover IRA into a new 401K he has with a new employer.

In the following year, if he converts before the account changes value again, Ben's converted amount of $32,000 will have a tax-free amount of:

Example 3a. Chris needs to process her own accounts separate from the Inherited IRA. Her SEP-IRA only contains $15,000 and she wants to do a $5,000 backdoor Roth. She opens up a new Traditional IRA account and makes the $5,000 non-deductible contribution to it. Between the two accounts, they total $20,000 and $5,000 is the basis. She converts the entire Traditional IRA and $5,000 of the SEP-IRA, leaving only $10,000 in the SEP-IRA. To calculate the tax-free part of the $10,000 in Roth conversions:

Example 3b. The Inherited IRA account value is $60,000 of which $20,000 is the remaining basis. In the current year, Chris withdraws $40,000 (more than her RMD) and the tax-free percentage of the Inherited IRA withdrawal is: