Difference between revisions of "The Vanguard Group"

The Vanguard Group of investment companies was founded on September 24, 1974 by its first Chairman, John C. Bogle.[1]

Since 1996, the firm has established financial service companies in Europe and Asia.

The Vanguard Group was an outcome of a 1974 corporate struggle at the Wellington Management Company that resulted in the firing of Wellington's CEO, John Bogle. Bogle appealed to the Wellington Company's mutual funds' board of directors to retain him as the funds' chairman and CEO. The board agreed, and a settlement was reached whereby a new firm, Vanguard, was established (May 1, 1975) to handle administrative and legal services for the funds. At it's founding, the firm had eleven funds, 28 employees, 372,648 investor accounts and provided an average expense ratio of 0.66%[4]

Over the next two years the new firm instituted a series of steps that reflected Bogle's vision of mutual fund management. The new firm was established as a mutual organization with the mutual funds (and by extension, fund shareholders) owning the management company, which would provide services to the funds at cost and reduce conflicts of interest.[5] (The SEC gave final approval of Vanguard's mutual form of business organization in 1981.)[6] In 1976, the firm created the first index fund available to retail investors, Vanguard Index Trust (now known as Vanguard 500 Index Fund). In 1977, the firm abandoned broker distribution and moved to no-load fund distribution. The year also saw the creation of a series of defined maturity bond funds (short term, intermediate term, and long term).[5]

Under John Bogle's direction (1975–1996), Vanguard became known for providing both low costs and clear direct communication with fund shareholders. In 1981 Vanguard began managing most of its fixed income funds in-house with the establishment of its Fixed Income Group.[4] The firm continued its development of index funds, bringing the first bond index fund to retail investors in 1986 and the first retail international index funds in 1990.[7]

The growth of employer-provided 401k plans led the firm to establish what was to become Vanguard Institutional in 1982. One year later, Bogle partnered with an outside brokerage firm (Pershing) to create Vanguard Brokerage Services (VBS) [8]. Bogle continued outside partnerships, this time with insurers (what is now Transamerica Premier Life Insurance Company, and in New York, Transamerica Financial Life Insurance Company) to bring a no-load, no surrender fee, low-cost variable annuity program to the firm in 1991. One of Bogle's final innovations was the creation of Vanguard's series of tax-managed funds in 1994. The following year the company added its investment advisory service (staffed with salaried certified financial planners).[4]

In 1996 John Bogle, nearing mandatory retirement age, transitioned management of Vanguard to his successor CEO, John Brennan. At the close of Bogle's stewardship, Vanguard had grown to 89 funds and 3,927 employees. The firm was managing 6,681,460 investor accounts at an average 0.31% expense ratio.[4] 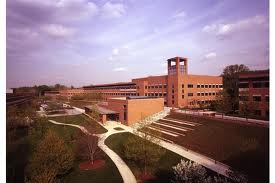 Under the direction of John Brennan Vanguard began expanding its operations into international markets and offering additional investment services in an ever evolving financial world. The firm made a commitment to technology, culminating in the establishment of on-line trading in 1998.[4]

The advent and growing popularity of the ETF provided a growing competitive threat to Vanguard's index fund base. Vanguard responded to this competitive challenge by first offering a program of lower cost shares for certain qualifying investors (Admiral shares established in 2000). Over time the program was to be gradually liberalized to include more of the Vanguard shareholder base. After losing a legal case with Standard and Poors concerning the licensing of the S&P 500 index for a proposed ETF share class of the firm's 500 Index fund, Vanguard soon switched index tracking to MSCI indices and launched its own ETFs, originally called VIPERS (subsequently known as Vanguard ETFs). By the close of Brennan's tenure as CEO, Vanguard was the third largest manager of ETFs.

The firm expanded its offerings of annuities during this period, partnering with insurance companies to offer a deferred fixed annuity and establishing in 2003 a Single Premium Immediate Annuity (SPIA) with both variable and fixed income payout options. The company also opened two series of balanced fund of funds designed for retirement investing. The series of Target Retirement Funds was launched in 2003. The series of Managed Payout funds opened in 2008.

John Brennan stepped down as Vanguard CEO in 2008, transitioning the firm's direction to William McNabb. 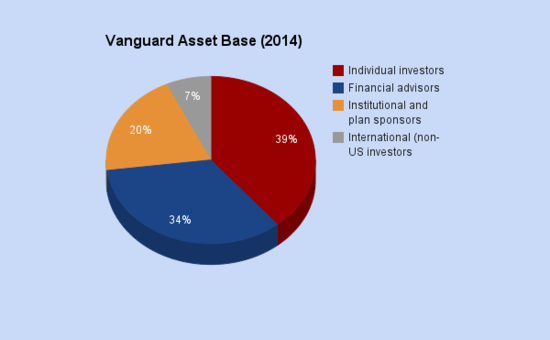 The early years of the McNabb era were marked by evolutionary changes in existing programs. In 2009 Vanguard Brokerage service ended its partnership arrangement with Pershing, as Vanguard decided to run the brokerage internally.[11] The year also marked the expansion of the company's international fund management operations to investors in the United Kingdom when Vanguard opened Vanguard Investments UK Ltd.[12] International expansion continued when Vanguard announced on June 6, 2011, the opening of Vanguard Investments Canada Inc.[13]

In 2010 the company cut the cost of investing for its mutual fund and exchange traded fund shareholders by a broad expansion of lower cost Admiral shares ($10,000 minimum investment) in most of the company's index fund offerings, and by VBS granting commission free transactions on Vanguard ETF transactions.[14] Vanguard also greatly expanded its ETF offerings by launching a suite of new ETFs based on S&P and Russell US stock indices.[15]

In October 2013, in a bid to lower costs, Vanguard announced a change in index providers for many of its US and international index funds. The firm switched from MSCI benchmarks to CRSP and FTSE indexes.

In August 2018 Vanguard introduced commission-free online transactions on approximately 1,800 ETFs trading on the major exchanges.[18] In November 2018 Vanguard lowered the minimum investment requirements for Admiral Shares from $10,000 to $3,000 for 38 index funds. [19] At year-end 2018, Vanguard was managing 5.3 trillion dollars of investor assets at an asset weighted expense of 0.12% of assets. The firm employed over 15,000 employees.[20]

In 2019 Vanguard retrenched from a number of services offered to investors. On June 19,2019 Vanguard announced plans to transition the client service and account administration for the Vanguard Variable Annuity to Transamerica. Vanguard also discontinued Vanguard Annuity Access®, an online platform that enabled individuals to compare income annuities from insurance companies.[21]

On July 31, 2019 Vanguard discontinued its Vanguard the VanguardAdvantage cash management program. According to Vanguard, less than 2% of eligible clients were using the service, and only half were active users. [22][23]

The Vanguard Group's family wide investment performance, as measured by fund rating services, has been above average.

A score below 2.5 is an indication that the firm has met with little success in that asset class. A score between 2.5 and 3.5 indicates the firm is about average. A score above 3.5 indicates the firm has a fair amount of prowess. The more funds a firm manages in an asset class, the stronger a signal the Fund Family Score is about the firm's performance.[25]

The Morningstar measure as of the end of the first quarter of 2019.[26] can be accessed on the second tab of Table 2.

Table 2. Percentage of Vanguard Funds which Exceeded Their Peers (2018)


(View Google Spreadsheet in browser, then File --> Download as to download the file.)
Note: If the spreadsheet is blank, select a different sheet, then back to that sheet. The image will be refreshed.

Not all of Vanguard's initiatives have proved successful. Some programs have been shuttered. Some mutual funds have been liquidated or merged out of existence into other mutual funds. While not a recognition of failure, Vanguard has at times radically changed a given fund's fundamental investment mandate so that the fund no longer provides investors with the originally designed sector coverage.

Vanguard's first forays into providing equity real estate investments for investors were the offering of two finite-lived equity REIT stocks, listed originally on the Amex exchange. The Vanguard Real Estate Fund I was offered in 1986[27] and the Vanguard Real Estate Fund II was offered in 1987[28]. These stocks were designed to invest in commercial real estate properties but liquidate between years seven and twelve. The offerings coincided with a down cycle in the real estate markets (concurrent with the savings and loans scandals and real estate tax reform). Returns on the stocks at liquidation were modest. By 1996, growth in the equity REIT market made it feasible for Vanguard to introduce an Equity REIT index fund.

In the fall of 2001, Vanguard expanded its insurance program by offering the Vanguard® Term Insurance Program to its shareholder base. The program offered 10- or 20-year level-premium term insurance with coverage amounts ranging from $100,000 to $10 million.[29] In 2005 Vanguard closed down the program, citing that the plan was not cost effective.[30]

The following table shows Vanguard funds that have been merged or liquidated from existence. Fund mergers or liquidations are the primary actions a mutual fund company takes to eliminate poor performing or small net asset funds. However one should note that some of Vanguard's fund mergers (Treasury money market fund and the Institutional bond and developed market funds) were taken to consolidate identical funds into a single fund in order to gain management and cost efficiencies, and that the liquidation/merger of the Preferred Stock and the Insured Tax Exempt funds were due to significant structural changes --tax rate changes on preferred stocks and municipal bond insurance firm bankruptcies-- in the funds' underlying asset classes.

In early 2002 shareholders approved a Vanguard proposal to change the mandate of the Vanguard Utilities fund into a Dividend Growth Fund:

As part of the proposals, the fund would no longer invest at least 80% of

its assets in common stocks of utility companies. Instead, it would invest in a wide range of companies from various industries. The fund, renamed Vanguard(R) Dividend Growth Fund, would not be permitted to invest more than 25% of its assets in any single industry. Shareholders are also being asked to approve a new investment objective for the fund: to provide above-average income and,

secondarily, to provide long-term growth of capital and income.[32]

Curiously, Vanguard was to create a Utilities ETF in 2004.

In 2004 Vanguard broadened the mandate of the Vanguard Precious Metals fund to include base metal and other materials mining stocks.[33], and subsequently totally changed the mandate of the fund to become the Global Capital Cycles Fund. The moves essentially ended the fund's applicability as an allocation in gold equity.