Difference between revisions of "Nathan Most" 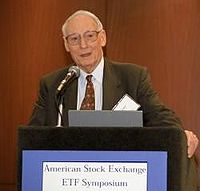 Nathan Most (March 22, 1914 - December 3, 2004) is best known to investors as the creator of the first U.S. exchange-traded fund, the Standard & Poor’s Depository Receipt based on the S&P 500 index. Most was born in Los Angeles, California, received a bachelor's degree from the University of California, Los Angeles. He died in San Mateo, California.[1]

Most held numerous positions during his career. He was an executive vice president of Pacific Vegetable Oil from 1965 to 1970 and an executive vice president of the American Import Company from 1970 to 1974. He shifted to the investment world in 1974, becoming president of the Pacific Commodities Exchange from 1974 to 1976; later that year he became technical assistant to the chairman of the Commodities Futures Trading Commission. He joined the American Stock Exchange in 1977, eventually serving as director of product development.[1] It was with the American Stock Exchange in 1993 that Most designed the exchange-traded fund. His last position was at Barclays Global Investors, where he served as a board member of the iShares Trust.[2]