Difference between revisions of "Mel Lindauer" 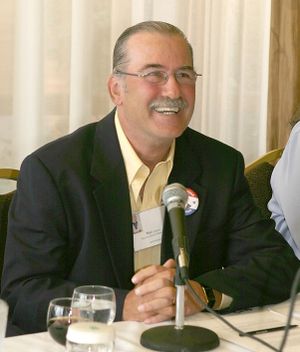 Mel Lindauer, CFS, WMS, (Daytona Beach Shores, FL) was dubbed "The Prince of the Bogleheads" by Jack Bogle. He's one of the leaders of the Bogleheads forums, where he and Taylor have combined to contribute an incredible 46,000 posts, helping investors learn the Boglehead way to invest.

A former Marine, he started investing in the late '60s and has first-hand experience with both bull and bear markets.

Together with Taylor, he initiated and continues to organize the grassroots Bogleheads' annual meetings. He's been quoted in a number of newspapers and national magazines and has appeared on CNN-fn.

Retired since 1997, he was founder and former CEO of a successful graphic arts company in the Philadelphia area for 30 years. Since retirement, he has earned credentials as a Certified Fund Specialist from the Institute of Business and Finance and as a Wealth Management Specialist from Kaplan College.

He also holds commercial and flight instructor licenses, and was commissioned a Kentucky Colonel by the Governor of his former home state of Kentucky.

Taken from Page 294 of The Bogleheads' Guide to Investing

Mel Lindauer is a contributor to The Bogleheads® View blog on Forbes.com.

Mel Lindauer was a biweekly column appearing in Forbes magazine online from November 27, 2009 through December 17, 2010. Starting on December 31, 2010, Forbes replaced the article series with a blog.

Historical Bogleheads View articles can be viewed online at Forbes.com: The Bogleheads' View