Equal weighted indices (EWI) utilizes an alternative index strategy that weights securities equally as opposed to weighting them according to market capitalization weights. This methodology places EWI in the Passive security selection and Fixed Weight segment of the Index Strategy Box (see Fig.1). 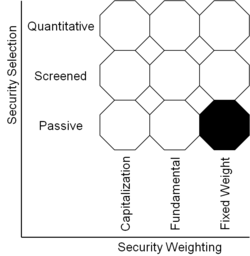 In weighting securities, an equal weighted index will usually divide a security by the total number of securities in the index (1/n). Thus each stock in the popular S&P EWI comprises 1/500 or 0.20% of the index. In the S&P EWI, stocks 500 to approximately 125 (in market cap size) are moderately "overweighted" and stocks approximately 125 to 1 are progressively "underweighted." The effect of equal weighting is to give smaller companies in a stock index more influence over index performance than would occur in a capitalization weighted index. There is also a tendency for equal weighting to give higher weighting to value stocks. Equal weighted indexes are also consistently less concentrated than market capitalization indexes. [2]

The sector weightings in a broad market equal weighted stock index are not determined by the fluctuating size of the companies in the sector, but by the number of companies in the sector. The result is that the EWI has a more stable sector allocation in comparison to a corresponding market capitalization index. There is also a tendency for an EWI to over weigh sectors comprised of smaller stocks and under weigh sectors comprised of larger stocks [2]

The following table provides annual returns for the S&P EWI.

Wilshire also provides an EWI for the Wilshire 5000 index (there is no index fund tracking this index, although Guggenheim Funds, nee Claymore, has filed with the SEC for a Wilshire EW 5000 ETF). [6] The Wilshire EW 5000 index would provide higher weights to mid cap, small cap, and micro cap stocks in comparison to the cap weighted Wilshire 5000 index. The return history (1971 - 2018) for this index is included in the appendix.