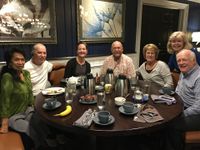 The introduction, presentation and discussion of academic papers was featured at three of the conferences.[note 2] Question and answer sessions with both Jack Bogle and with a panel of investment experts have become conference staples, as has a non-scripted dialog session between Mr. Bogle and noted author William Bernstein, known as “The Fireside Chat”.

Over time, the conferences have grown more and more popular, with steady, measured increases in attendance. Conference organizers believe the current level of 200 attendees strikes a balance between participation levels and the desire to keep attendance low enough to assure friendly social interaction with Jack Bogle and the other authors and celebrities in attendance.